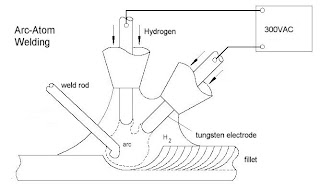 This process involves injecting hydrogen into extreme heat in the arc, the temperature makes the hydrogen gas (H2) and breaks it down into its simplest form, which would be two hydrogen atoms. The arc is formed between two tungsten electrodes, not between the metal workpiece and the electrodes as in other types of arc welding. This process absorbs energy away from the arc, but gives it back as the hydrogen recombines as it contacts the metal work surface.
The procedure uses the heat from the reaction to heat the metal. The temperature of the flame reaches 3700°C and can then be used for welding . The arc in this case does not have much of an effect on the weld except it can increase the temperature some as the electrodes get closer to the weld pool. The transformer for this operation is generally around 300 volts, so caution is needed.
For years hydrogen arc welding was used for hard-to-weld metals such as nickel-base alloys and high alloy steels. The hydrogen used helped reduce gas bubbles in the weld, which provided a seam with fewer pores. This makes a much stronger weld because more metal is holding the pieces together. The hydrogen is also good due to the fact that other gases cannot enter the weld pool because it is protected by the stream of hydrogen gas. This process has been almost overshadowed by inert-gas arc welding.

Get know about Arc Welding and Stick Welding

March 11, 2010 matthew.gamers14 Comments Off on Get know about Arc Welding and Stick Welding

Submerged Arc Welding and its benefits

March 12, 2010 matthew.gamers14 Comments Off on Submerged Arc Welding and its benefits