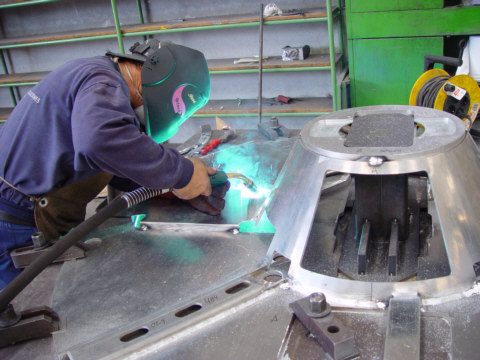 Oxy-Acetylene is a colorless and highly flammable gas.Mostly used for oxy-fuel applications with argon,acetylene has a high heat release in the primary flame and a low heat in the secondary flame.For Argon,it can provide an inert and clean environment free from nitrogen and oxygen for annealing and rolling metals and alloys. In the casting industry, argon is used to flush porosity from molten metals to eliminate defects in castings. In the metal fabrication industry, argon is used to create an inert gas shield during welding.

Oxy-Acetylene welding equipment consists of two large tanks Oxy-Acetylene Welder(one containing the oxygen and the other containing the acetylene),a regulator assembly at the top of each tank, a pair of hoses leading from the regulators to the torch handle and the torch handle itself.The first thing to do is adjust the line pressure,which is controlled by the large wing nut on the front of each regulator.

Close both valves on the torch handle (one controls the oxygen and the other controls the acetylene).Then slowly open the large valves at the top of the tanks. It’s a good practice to stand to one side when doing this because the sudden pressure could blow out the face of a defective gauge and send parts flying.Next, open one valve on the torch handle about a half turn, then screw the regulator wing nut in or out until the line pressure reads about 5psi. Close the valve, then adjust the other line to the same pressure.

The basic idea is to use the torch to create a small puddle of molten metal on the work, then put the end of the welding rod into the puddle. This melts the rod, causing it to mix with the molten metal, which bonds the two pieces together. If you do that correctly, you will have made a good weld. If you don’t apply enough heat to get the work to puddle, but instead quickly melt the rod onto the work, the weld will not hold.

If you apply too much heat to a single spot you’ll melt away the work entirely, leaving a large hole. Good technique involves adjusting the torch to the correct intensity for the thickness of the work, creating a good puddle, and moving the puddle along at the correct rate as you feed the correct amount of rod.  Although we’re describing gas welding, the same type of puddling must also occur with arc or mig welding.  A feel for that comes only with practice.

Either fillet or groove welds are used depending on the work-piece and on strength requirement.

In joint preparation it should be ensured that the plate edges are free from rust or oil.this prevents excessive fumes and helps improves the appearance of finished weld.A strong wire brush is used to dispose of rust and small burns.The parts to be welded may be pre-set to counteract distortion.

Welders are also often exposed to dangerous gases and particulate matter. Processes like flux-cored arc welding and shielded metal arc welding produce smoke containing particles of various types of oxides. The size of the particles in question tends to influence the toxicity of the fumes, with smaller particles presenting a greater danger.

Welding,without the proper precautions, can be a dangerous and unhealthy practice. However, with the use of new technology and proper protection, the risks of injury and death associated with welding can be greatly reduced. Because many common welding procedures involve an open electric arc or flame, the risk of burns is significant. To prevent them, welders wear protective clothing in the form of heavy leather gloves and protective long sleeve jackets to avoid exposure to extreme heat and flames.

Additionally, many processes produce various gases, most commonly carbon dioxide and ozone, and fumes that can prove dangerous if ventilation is inadequate. Furthermore, because the use of compressed gases and flames in many welding processes pose an explosion and fire risk, some common precautions include limiting the amount of oxygen in the air and keeping combustible materials away from the workplace.

Additionally, the brightness of the weld area leads to a condition called arc eye in which ultraviolet light causes the inflammation of the cornea and can burn the retinas of the eyes. Goggles and helmets with dark face plates are worn to prevent this exposure, and in recent years, new helmet models have been produced that feature a face plate that self-darkens upon exposure to high amounts of UV light. To protect bystanders, transparent welding curtains often surround the welding area. These curtains, made of a polyvinyl chloride plastic film, shield nearby workers from exposure to the UV light from the electric arc, but should not be used to replace the filter glass used in helmets.